“The CAP(1) is estimated to cause the developing countries a welfare loss in the region of US$20 billion annually, which is twice Kenya’s entire GDP. This is according to a report by international monitoring organisation, Global Financial Integrity (GFI), which released a new report on illegal capital flight this week. The report tracks illegal outflows from 2003 to 2012.”

“South Africa is losing roughly R147-billion per year to the illegal movement of money out of the country.”

“WASHINGTON, DC – A record US$991.2 billion in illicit capital flowed out of developing and emerging economies in
2012—facilitating crime, corruption, and tax evasion—according to the latest study released today by Global
Financial Integrity (GFI), a Washington, DC-based research and advisory organization.”

“Depressive-masochists see clearly the tragic existential realities of life. Their way of being in the world bears this sensibility forward, witnesses to it, and
invites others into their sense of the ethos required to survive in the face of it. Our concern about the way this gets articulated, however, is usually that this sensibility is set within a particular emotional, ethical, and aesthetic framework which establishes a self- and other-punishing cycle which impoverishes their life and the lives of those with whom they are in relation.
But, then, of course, we are always confronted with the possibility that this is in fact simply the way the world is. Perhaps the depressive-masochist sees something of which we all ought to be convinced: that, in the final analysis, the depths of life really are punishing and unforgiving, that the particular kinds of interpersonal ethics that mark the depressive-masochist’s life really are the best accommodation to a world so characterized, and that the emotional dynamics, while harsh, are nonetheless appropriate and, perhaps even, unavoidable for such a world.
In other words, the witness borne through our parishioners and clients to us calls up from us, and calls into question for us, the witness of our own communities, the witness borne through us to them. As pastoral caregivers, our offering care at all to depressive-masochists, care that is something more than attempting to assuage their discontent in the face of a self-other-Other relation they correctly
perceive as exhausting their life possibilities, rests on our intuition that the above conclusions need not be drawn and that, indeed, the depths of life are not adequately portrayed in such a way. Yet, to take the witness of the other seriously here is to take our own witness seriously again as well: to be called into a mutually critical conversation between the witness of self and other.”

From: Mystical Communion with an Unforgiving God 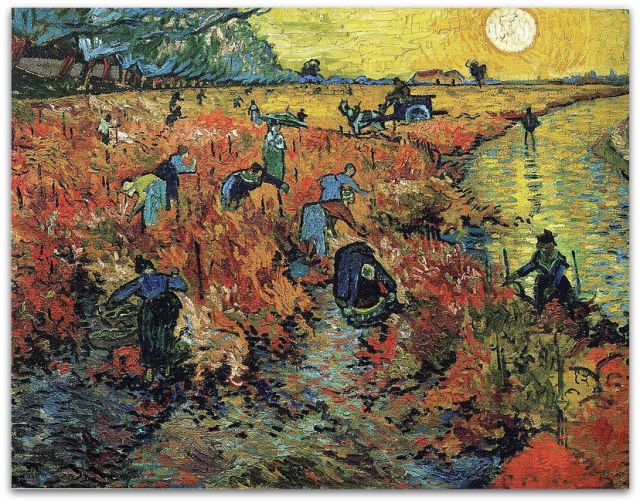 The only painting ever sold by Van Gogh during his lifetime: The Red Vineyard.

“Our society runs off of unbelievable and unattainable ideals, powered by endless desires. It is, to be tart, a useless rat race, and oftentimes a malignant one at that.

(Thanksdarthbarracuda, I hope you don’t object to my quoting you here.)

“It would be a dull world if we all thought alike.”

Evelyn Waugh, A Handful of Dust

“I’ve always been bad. Probably I shall be bad again, punished again. But the worse I am, the more I need God. I can’t shut myself out from His mercy. … Or it may be a private bargain between me and God, that if I give up this one thing I want so much, however bad I am, He won’t quite despair of me in the end.”

Weltschmerz, basically, is the depression we feel when bamboozlers, fanatics, manipulators, trolls, bigots, demagogues, fear-mongers, liars and prigs threaten to take over the world, and there’s nothing, we think, we can do about it.” – Em L Smith

Some reflections on a strange-looking fish.

“… by day these fish remain in the gloomy depths and towards evening they rise to the upper layers of the water column to feed by starlight, returning to deep water by daybreak.” – Wikipedia

Even in the case of strange creatures like the Fangtooth, one may find a certain poetic beauty. There is something poignant about this ugly chap who rises from the depths to feed by starlight.

Given the world we can observe about us, together with the microscopic and subatomic world and the abstract world of mathematics, we might ask ourselves what the God who made things is really like. Add to this consideration the fossil history of the world – it’s past zoology and botany -evidenced by long-extinct species of which the dinosaurs are but one example, God (whoever/whatever we understand the word “god” to mean) certainly appears to be the enigma of enigmas. Why create giant flesh-eating dinosaurs? To what end a world of shifting seismic plates and random global catastrophes, bizarre insects and viruses? Opinions (and dogmatic assertions) on this matter are infinitely varied, and it is worthwhile listening to the Christian fundamentalist as much as the militant atheist if only to ponder the variety of perspectives. I confess I think the jury’s still out. Irrespective of our conclusions It does appear the creator of the world made some strange things, which I propose must in some measure inform our opinion of ‘him’ (him being merely a  convenient pronoun). Consider for instance the “Fangtooth”, or Anoplogaster, pictured above and below. While strangeness is subjective (as are all our concepts of beauty and ugliness), perhaps Anoplogaster’s unfortunate appearance is beautiful to God?

Monstrous creatures of the depths are “monstrous” because we have a preconceived notion of the monstrous. It’s really just a construct. Beauty and ugliness are relative concepts: Umberto Eco’s On Beauty and On Ugliness are a useful introduction to a very complex subject.

So-called monstrous creatures certainly challenge our understanding of the sectio aurea, although who knows if an ichthyologist would not find the Golden Section right there in the scales and teeth of Anoplogaster? I suspect she would.

Perhaps it would be useful look at monstrous creatures another way – through a microscope for instance.

ABOVE: Surface of zebrafish skinhttps://www.nwfsc.noaa.gov/sem/fish.cfm

The microscope reveals a world which, for me as a graphic designer, provide a powerful argument for – if not a nice friendly deity – then certainly for intelligent design. No one throws some balls of wool on the table and a Kaffe Fassett jersey appears. No amount of atheist rant will convince me that an Afghan balouch could manifest with out the artistry of an Afghan weaver. 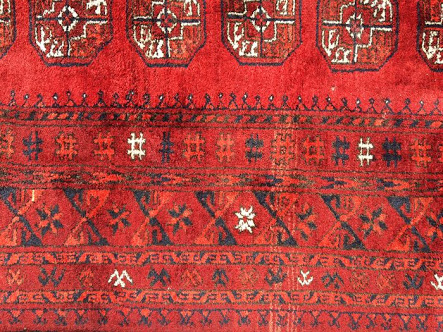 Above: detail of an Afghan Balouch rug. Mid 20th century.

I imagine the mediaeval theologian Thomas Aquinas peering through an electron microscope and saying to the huddle of peeved atheists, “I told you so”. (Dawkins on the other hand, a copy of his own book The Blind Watchmaker, would remain stubbornly unconvinced.)

The Fangtooth isn’t particularly large compared, say, to a human being (though to a human embryo this aquatic carnivore would appear as a leviathan). In matters of the monstrous, clearly size counts.

Above: Monstrous monsters. You just know this isn’t going to end well.

It is interesting to note that the humble zebrafish is a distant cousin of ours. Apparently we share 70% of the fish’s genes. It’s a disquieting thought that you and I are related – albeit in the ancient past – to Anoplogaster.

” A comment on the hierarchical man-eat-man (or fish-eat-fish) world of human society”.  (i)

“Small organizations or insignificant people tend to be swallowed up or destroyed by those that are greater and more powerful … The proverb was first recorded in a text dating from before 1200. In Shakespeare’s play Pericles (2:1), the following exchange occurs between two fishermen: “‘Master, I marvel how the fishes live in the sea.’ ‘Why, as men do a-land—the great ones eat up the little ones.'”(ii)