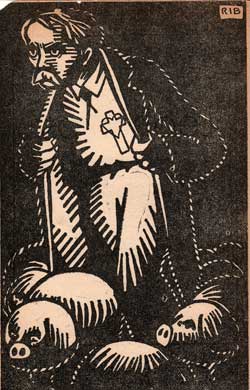 “Man has places in his heart which do not yet exist, and into them enters suffering, in order that they may have existence.”

“Every man who begets a free act projects his personality into the infinite. If he gives a poor man a penny grudgingly, that penny pierces the poor man’s hand, falls, pierces the earth, bores holes in suns, crosses the firmament and compromises the universe. If he begets an impure act, he perhaps darkens thousands of hearts whom he does not know, who are mysteriously linked to him, and who need this man to be pure as a traveler dying of thirst needs the Gospel’s draught of water. A charitable act, an impulse of real pity sings for him the divine praises, from the time of Adam to the end of the ages; it cures the sick, consoles those in despair, calms storms, ransoms prisoners, converts the infidel and protects mankind.”

Léon Bloy: Pilgrim of The Absolute

“Bloy’s corpus as a whole gives voice to his idea that history is a dream built on the illusion of time. Bloy is said to have regarded the world as hell, where each individual is a demon charged with torturing the next; certainly he considered the world a sort of prison; one of his recurring quirks is his fetish for referring to his characters as “penitents.” Bloy has often been compared with the Old Testament prophets, calling on sinners to repent. Huysmans spoke of his “holy rages” and his “inextinguishable hunger for justice in the face of the perpetual infamy of mankind.” An odd admixture of Thomas Carlyle, Karl Kraus, William Blake, and Allen Ginsberg, Bloy was a terrorist with a pen and his fire, Kafka said, “is nurtured by the dung heap of modern times.” Elsewhere called a “co-signatory of God’s vengeance,” Bloy takes a look at planet earth and pronounces: this property is condemned.” – Will Schofield, http://ajourneyroundmyskull.blogspot.co.za

“Suffering “hunger and thirst, nakedness and oppression,” never having a fixed abode, this was the fate which Bloy both lived and mulled over and over in his work. Bloy’s desperate effort to reach God, multiplied by the signs of His absence, manifested itself in a constant crisis of frustrated transcendance and its imperious necessity. The writer retraced the torments of an unbearable state of waiting, which he pushed to the point of blasphemy. So that, in his discourse, he substituted verbal violence, steeped in a rhetoric of excess, for demonstrable logic or apologetics; this aporia of exegetical speculations multiplied to infinity the spiritual tensions and ironic outcomes of his fictional stand-ins; Bloy’s subversive method mixed laughter with an inspiration both biblical and farcical; he neutralized contraries:the sublime and the grotesque, the scatological and the eschatological, Lucifer and paraclete.”

“He gave frequent vent to a cruel spleen, concentrating his animus upon the haute bourgeoisie. His pleasureful notes on the Opera Comique fire of 1887 and the Titanic suggest psychopathy. He had the wounded soul’s longing for an apocalypse to give cosmic release to his fastidious parochialism. With thoroughgoing chauvinism he abominated Germany and England, the great political, military, and spiritual enemies of France. He idolized Napoleon. He was intrigued by mystical experiences of the faithful but received no visitations. No angel would have dared approach him.”