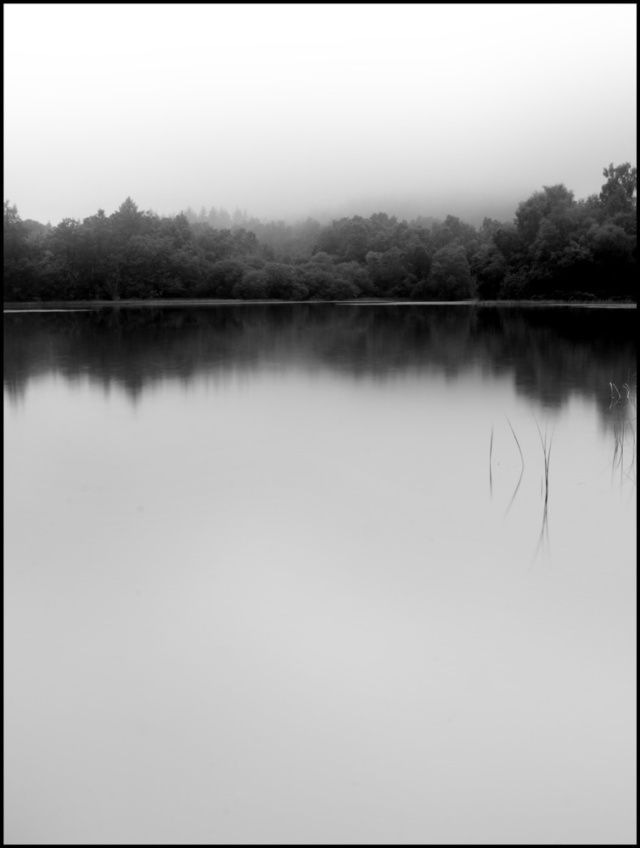 When I was at the National School of the Arts in Johannesburg (many years ago!) a painting teacher, critiquing what was probably a fairly average painting of mine, said that my landscape had no “point of tension”, and he insisted that I introduce some element to create this tension. After all these years, his comment remains a point of contention for me. It was precisely this absence of an interruptive object or “point of tension” which I wanted, although at the time I was unable to explain why.

Would a half-sunken boat or an old jetty ‘help’ this photograph by Angus Clyne? I think not. For me, this image is near perfect. It needs nothing more. An added object would create a narrative, a movement, which would disrupt the quiet power of the image. It is as if any narrative is enclosed, hidden within the image itself. something might have occurred before or after this moment in time was captured by the photographer, but these ‘unknowns’ – their absence – are what make the image so powerful.

The paintings of Rothko and Michael Heizer’s land art Double Negative come to mind: it is the stillness and paradoxical ‘presence of absence’ which attracts me. Stasis is the closest word I can find, but it is inadequate, for it suggests a lack of dynamism or vitality, whereas the very stillness of the image above is redolent of a hidden energy. Rothko, Heizer: I donot pretend to understand their work; suffice to say I experience something when standing before it.

My own schoolboy dabblings with paint, and the teacher’s criticism of it, is significant for me. It was an early perception of a “something” which I am unable to describe. One could call it an “existential”moment (and sound horribly pretentious). Was it the Ungrund, Jakob Boehme’s eternal silence of the Abyss? It is the ineffable “thing” (which, of course, is not a thing) one may sense standing before a landscape. It can be be experienced in music, in dance, in a work of art. I have found it in the quiet of Quaker worship, and sitting alone before a stained glass window in the dark interior of a church. Sitting listening to the rain, or the wind in the trees.

It would be clichéd to say it was “an experience of the Divine” – it too easily suggests some sort of enlightenment or the presence of something ‘other‘, an intrusion of sorts. And as I described above, this “something” is precisely not an intrusion. What then?

My words begin to break apart under the weight of their own imprecision.