I hadn’t realized that it was Godwin who initially broke the story of Gukurahundi – the 1983 to 1987 massacre of Ndebele men, women and children in which an estimated 20 000 people were murdered by Mugabe’s North Korean-trained military. (Some estimate the figure to be higher.) Godwin was exiled from Zimbabwe as a result of the exposé which Mugabe wanted kept secret.

There’s a useful review of the book at the Washington Post: http://amzn.to/2ppcTaJ

Read together with Godwin’s “The Fear” (2011), it is unconscionable that the South African government and the African Union have continued to adulate and fawn over Mugabe as if he were some unfairly maligned saint. It is beyond all abasement, beyond sickening, beyond reason, beyond morality. I keep trying to understand how our ANC-led government (which represents me, I’m ashamed to say) can hold – with such tender devotion – the bloodied hands of tyrants, in light of the struggle against the tyranny of apartheid. Right now in the press there’s a photo of Zuma and Mugabe smiling at each other from the front page of the newspapers: Mugabe’s a guest at the Union Buildings in Pretoria). One can only understand it in terms of the paradigm of a perverse solidarity in the resistance to colonialism, where even devils are ‘canonized’ simply for their place in the narrative of resistance. Or do a brutalized people perhaps have a right to brutal leaders who continue the process of brutalization?

Mugabe is just one of my country’s unsavoury friends.

[How do we even begin to explore the moral disaster of these pacts with the devil? I have just read a review of a BBC documentary on Africa’s celebrated hero, the late Muammar Gaddafi. An except: “Christopher Olgiati’s film outlined Gaddafi’s funding and coordinating of terrorist movements, the orchestrating of civil conflicts, the training of genocidal warlords, the ceaseless executions of enemies real and imagined. Amid the litany of violations against God and man and conscience, some details stood out. Idi Amin’s prisoners having to choose between suffocation in their overstuffed cells or death by stepping into the electrified water outside. The hot pokers and dogs trained to bite to a maximally-painful depth in Abu Salim jail. The six-year-old with her lips cut off and left to bleed to death because she did not smile when Gaddafi thought she should.” – https://www.google.co.za/amp/s/amp.theguardian.com/tv-and-radio/2014/feb/04/storyville-mad-dog-gaddafis-secret-world-tv-review

As for Mugabe’s bizarre vindictiveness, there’s a BBC documentary worth seeing: Mugabe And The White African which received the prize for best documentary at the British Independent Film Awards.

But isn’t that just the pathetic bleating of a discarded and discredited settler-population? Isn’t a little vengeance a good thing? Someone must be made to pay for colonialism’s excesses, and Rhodes and Milner and Verwoerd aren’t around to pick up the tab for their lavish meal. Shouldn’t all whites be deprived of land and possessions? Shouldn’t they all, at day’s end, leave?

But it is fair to say that Africa’s postcolonial woes are increasingly internicine – what dictionary.com defines as “mutually destructive or ruinous; maiming both or all sides: internecine war. 2. of or relating to slaughter or carnage; bloody. 3. of or involving conflict within a group or organization.”. Colonialism is still a valid referent, and the whites of Africa provide a convenient scapegoat, but the excuses are wearing thin. This isn’t to absolve the whites of their past, but to unmask a wickedness which proclaims Liberation while entrenching tyranny.

Its ironic that Mugabe, chairman of the African Union, regularly lambastes “The West” which provides the lion’s share of EU funding. Hypocrisy is just another aspect of tyranny’s ugly face.

Is this all simply to ‘cock a snoot’ at the West, to assert a sort of victim’s belligerence, that we cosy up like whores with the Devil? Is this why our sycophantic government repeatedly shunned the Dali Lama in deference to our new Chinese overlords? Freed of our Colonial pimps we run headlong into the arms of our Chinese, Indian and Russian ones. Where is Africa’s self respect? We proclaim the mantle of Fanon, Biko, Said, Mandela, Sisulu – but replicate the insidious dynamics of postcolony that they warned us against.

Is this why, like a gang of thieves we illegally defied the International Criminal Court in defense of the war criminal, al-Bashir? Below is the ‘charge sheet’ against our recent guest, from the ICC website: 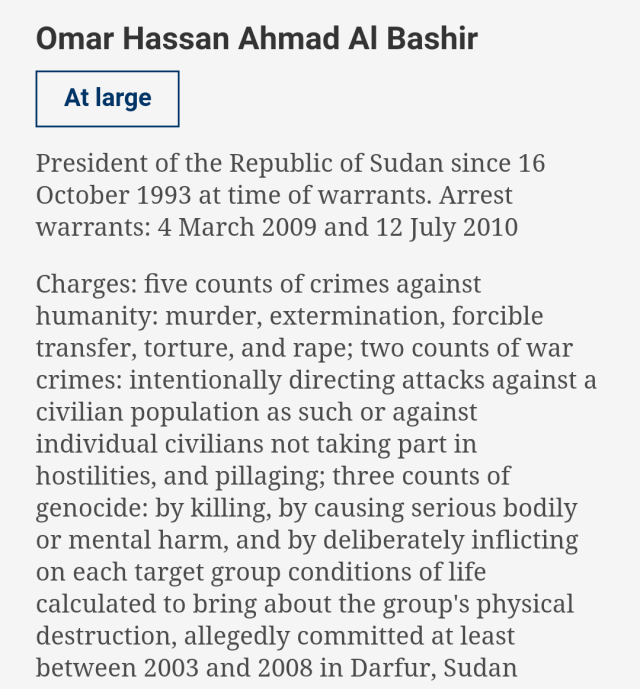 Yep. This is the sort of chap we chose to assist in a cloak-and-dagger escape from justice, in violation of our commitment to the ICC and our own courts’ explicit ruling. To wine and dine a criminal in luxury at the taxpayer’s expense. First colonialism and apartheid; but what shall we call that which has followed? Liberty? –  what can we even name it, this era of the machinations of wicked men?

Africa’s postcolonial affinity for murderers, warlords, criminals and genocidal killers is without a name, unless perhaps we can call it shame. I can’t find an “ism” which describes such evil masquerading as “liberation”. And yet the cause of liberation seems to legitimize any evil you care to imagine. And the evils of our past are used to silence the critics: only a reactionary would attack the stalwarts of the Revolution!

I read somewhere that Franz Fanon’s widow committed suicide after watching protesters being murdered in the street by the forces of the new Algerian regime, the regime which had expelled its colonial master. It was a moment of catastrophic disillusionment for her, and postcolonial Africa provides so many examples of such disillusionment. I think of Zimbabwe’s Gukurahundi, of South Africa’s Marikana massacre. The list is a long and depressing one.

There are no excuses, though one attempts to find explanations. Were the seeds of such an evil plant sown in the toxic soil of colonialism? A result of brutalization? Witchcraft and miasma? Or the fact that the ideology of revolution as articulated on this continent is itself an alien import: Communism was, after all, the ideology of a nominally Jewish, white, middle-class Prussian intellectual. For all its exotic slogans and shibboleths, it took root in places which it was never meant to go: Marx had his revolutionary target set on England, France and Germany, not Russia and Africa.

Are we not like an abused woman, the victim of relentless violent assault, colonized not once but repeatedly: First by the imperialists, and by the ideologues of the cold war, and then by neoliberalism. And we absorb, internalize and articulate our own version of these beliefs – political, ideological, religious: accretions with all the alienation and violence they imply. The language of our resistance is itself disappointingly unoriginal. Our lexicon of revolutionary words, our viva’s and our comrades, are a non-indigenous semantic invasion, an import from other revolutions and European languages, the Russian mind. Mugabe’s 5th Brigade were trained by North Korean murderers: the repressive violence exercised was a third-hand import from Asia, a violent and alien hand-me-down ideology visited on his own people. Mugabe’s own thinking was and is colonized by the alien ideology of Chairman Mao.

I suggest this is at least a part of it: we ape our abusers, and like the abused partner, we remain at once defiant – declaring ourselves free of the tyrant – yet remain poisoned by the toxic soil in which we grew. Then, we turn our hatred upon ourselves in self-harm.

At some point the abused must break the cycle, but in Africa we seem dead set on replicating the abuse.

I imagine devils: the devils of Empire, and the devils of Communism embraced with a view to casting out the first devils. As with any dealings with devils, they have their own agendas: they possess us, alter us, control us. New devils follow in the wake of the old, for we are legion, and now Africa bends beneath the weight of neoliberalism, one more tawdry foreign import to secure Africa’s captivity.

Riek Machar and the 1991 Bor massacres:

How Machiavellian are African leaders?